How Jose is Going Through Klopp’s Nightmare 12 Months On

I heard a quote from Jurgen Klopp just after they defeated us on Saturday. It went something along the lines of this:

“I feel for him. He’s a great coach. I don’t think anyone in this room doubts he’s one of the best in the world. Things like this happen. I had a similar situation at Dortmund last year.

“The good thing was no one in the club was in doubt of my situation. I feel for him of course but it’s work.”

And it triggered a memory of Klopp’s own nightmare season last year. The season that led to him leaving Dortmund, despite turning round one of the worst starts imaginable. Sound familiar?

Klopp’s High Flyers
To give context to Dortmund’s decline last year, they won the Bundesliga back in the 2011/12 season beating Bayern Munich by 8 points.

The following 2 seasons they finished second to Bayern by a decent margin (by 25 points in 12/13 and 19 points in 13/14). In these two seasons they also topped their Champions League group which featured the likes of Real Madrid, Man City, Arsenal, Ajax, Napoli and Marseille.

They lost 7 out of their first 10 games, (their 10th game of the season being one year ago to the day) leaving them next to bottom of the Bundesliga.

Inconsistently they began picking up points but they still lost 4 of their next nine (only winning 2 of those games).

Form then returned as they went on a 7 game unbeaten run in February and topped their Champions League group again. Klopp had been to the bottom and was on his way back.

But it seems the damage had already been done.

Dortmund trundled to the end of the season, finishing 7th – impressive given their start to the season. 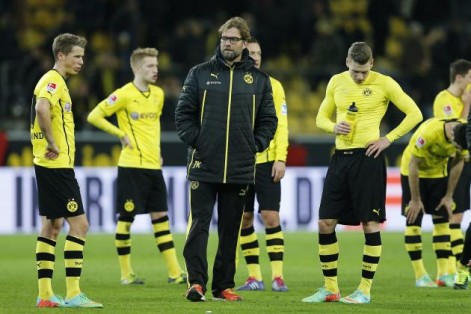 Klopp announced in April that he would leave the club at the end of the season after asking to be released from his contract. It had taken it’s toll on him. He’d taken Dortmund as far as he could.

At the time he said: “I always said in that moment where I believe I am not the perfect coach any more for this extraordinary club I will say so. I really think the decision is the right one. This club deserves to be coached from the 100% right manager.”

Comparing Klopp to Jose
That sort of transparency we’re unlikely to see from Jose but there are scary similarities between Klopp’s horror season last year and Mourinho’s so far this year.

Things have to improve at the Bridge, but you wonder whether too much damage is being done in this fragile period that will see Mourinho call time at Chelsea at the end of the season (if Roman doesn’t make the decision for him sooner).

Who knows what’s next for Jose and the club, but Dinamo Kiev midweek provides another nice respite from the toils of Premier League football.