There can be no doubt that Saturday’s game at the Bridge was of the tactical nature that Jose thrives on. Long gone are the days when he would allow for any elements of risk to slip into his game plan particularly with the title so close and it not essential for Chelsea to take three points. Jose has done his sums. A defeat would have heaped too much unwanted pressure onto a squad that’s looked a little too leggy over the past month.

This is the manager that Jose Mourinho has developed into over the past decade. A different Jose to the one that first took on the Chelsea job back in 2004. And in Azpilicueta and Ivanovic, he has found two full-backs that give him the discipline required to win titles. 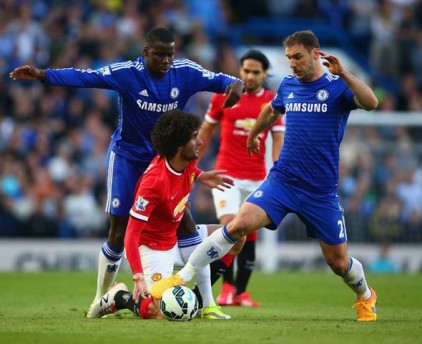 Post-match quotes in a BBC article titled Man United’s key players ‘in our pockets’ which every man and his dog must have read by now, give a little piece of insight into his thinking:
“Control their direct football to Marouane Fellaini and control the wingers from making crosses on the inside foot.”

Which got me thinking, can it really be that simple? A quick dig into the stats suggest that, yes it can.

Let’s take the wingers comment. It’s no secret that Ashley Young has been in good form of late (how and why are beyond me) on the left, and a combination of Mata playing narrowly on the right allowing Valencia to advance has been working. Falcao, Rooney and Fellaini all have an aerial presence so why not feed them. Jose saw them coming.

Now take United’s crossing accuracy on Saturday against the Blues. 12.5%. That’s from 70% possession remember. And none of Ashley Young’s 6 crosses found any target of any sort.
Of course, accuracy can be down to many things with ability arguably topping that list (Ashley Young may prove otherwise) however the key factor on Saturday for me was the work rate of Azpilicueta and Ivanovic. Their pressure on United’s wingers, positional play off the ball and sticking to their task gave us the platform for an almighty victory.

Let’s go back to the numbers then because United put plenty of crosses into our box, 24 to be exact which is higher than they’ve averaged throughout their past 4 victories (20.75 crosses per game). Of those crosses, Mata, Shaw and Fellaini represent almost half (11) which shows that we forced United back inside to cross from narrow angles (Fellaini & Mata) or from deep (Shaw). This isn’t where they want to be putting the into our box from, least of all do they want Fellaini to be the man putting the crosses in. 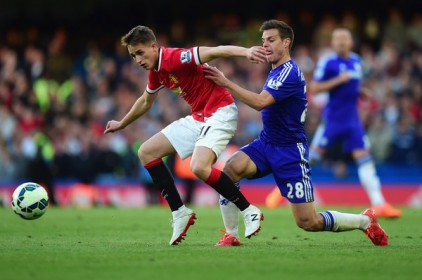 Enter stage right, Kurt Zouma and Nemanja Matic. When United’s wingers began to move the ball back inside to find a different angle to cross from they found themselves confronted with the Blues very own brick wall in the shapes of Zouma and Matic. Both sitting in midfield and destroying as much as possible.

Would you believe me if I told you that neither John Terry nor Gary Cahill made a tackle on Saturday? Because I wouldn’t. But that’s exactly what happened. Perfectly protected by Zouma and Matic, between them they made 11 ‘clearances’ and blocked 4 shots (according to Opta) but neither of them made one single tackle.

So who made the most tackles for the Blues. You guessed it:

Of course Jose knew this already. Go back to the 2010 Champions League Final. Van Gaal’s Bayern Munich against Mourinho’s Inter Milan. Let’s have a quick look at some numbers from that game.

Two of the top three tacklers for Inter were Esteban Cambiasso and Javier Zanetti, both playing in defensive midfield, both given very specific jobs which were executed to perfection. No huge revelations that your defensive midfielders are making a lot of tackles, but neither do I think its a coincidence Mourinho paired Matic with Zouma.

While I’m not so sure about “in our pockets”, one thing that it pretty clear is that his gameplan was utterly vindicated. Of course this approach won’t work against every European giant we come up against (see Champions League exit to PSG), but it looks like Jose’s tactics may just have outfoxed Van Gaal once again.