How Chelsea Fans May Have Saved Jose His Job

As Chelsea trudged from the field at the Britannia Stadium on Tuesday night, you would think another defeat to mid-table opposition (albeit on pens) would heap further pressure on an already embattled Jose Mourinho.

But something happened just after Hazard had his spot kick (brilliantly) saved by Jack Butland.

The Chelsea away fans began to sing Mourinho’s name. The team, for their efforts, were applauded from the field.

This wasn’t a barracking from a set of fans that might (justifiably) feel they’re owed a victory or two by now.

Instead the travelling fans on a cold Tuesday night in Stoke (cliche I know), stood up for their manager and their players.

“Hundreds of Chelsea fans applauded Jose Mourinho as he left the pitch.” via @BBCSport

“Jose Mourinho clapped the fans when he came off and they reciprocated.” Trevor Sinclair via @BBCSport

“The fans are clearly behind him, we have to wait and see if the owner is.” Trevor Sinclair via @BBCSport — Chelsea FC Blog (@chelseablog) October 27, 2015

For me, Roman Abramovich will be looking at two key things before making any decision on Jose – whether he has the fans on side and whether he has the dressing room on side. He doesn’t need convincing of Mourinho’s managerial qualities or ability.

Jose stood up for his players in the post match press conference too.

It tells a story of a united front and Jose, who has singled out numerous players in recent weeks, has now given them his support.

The performance was pretty good too, we were just not quite as clinical as we have been in the past.

All signs point to a return to a positivity that has been missing so far this season.

The legends continue to line up offering their backing to Jose and the team. Lampard, Zola, now Ancelotti.

As for what my opinion is worth, I’m still behind Jose as Chelsea manager.

The next two fixtures will probably decide his future – Liverpool at home and Dinamo Kiev at home.

Lose them both and we’re in deeper trouble in the league and probably out of the Champions League.

Win them both and the recovery begins in earnest. Jose gets a reprieve.

(Whether we’ve left ourselves too much to do to genuinely challenge is matter for debate.)

Let’s hope all in attendance at Stamford Bridge for the next two games are as positive and vocal as our away support were at Stoke. It counts for more than many people realise. 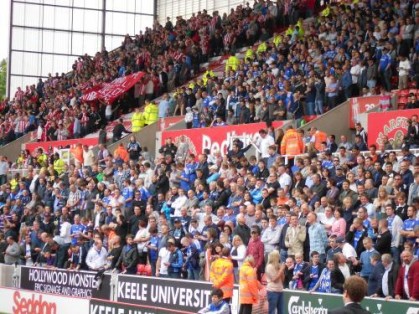