Dylan Kathoke continues his series on potential January targets with 3 midfielders for Chelsea to take a closer look at.

The Current Midfield
Chelsea’s midfield this season has fallen well short of where it was last season.

Fabregas looks like a shadow of his former self, Matic looks lost at times on the pitch, whilst Ramires has had a stop start season due to numerous injuries.

The only positive to come out of our midfield two is John Obi Mikel. He seems to have an aura about him this season and he has almost “taken charge” and stood up to be counted whenever he has been on the pitch this season.

It is clear that reinforcements are needed so I have drawn up a list of possibilities that would fit nicely into the current Chelsea side.

1. Toni Kroos
German World Cup winner Toni Kroos has had a mediocre time at Real Madrid since he made the swap from Bavarian Giants Bayern Munich.

Kroos hasn’t exactly hit the ground running and although he is only in his second season at the Bernabeu, he is already being linked with a move away from the club.

Kroos has yet to display his sheer quality at Real Madrid but with Zinedine Zidane taking over from the not so popular Rafa Benitez it is another chance for Kroos to prove his worth to another manager. Reports, however, suggest that either way he will be looking at a move away from the club.

In The Guardian this week, Chelsea have been linked to Kroos, with reports suggesting Chelsea were preparing a £40 million bid.

Kroos’ talent is unquestionable, his eye for a pass and shot on goal are second to none.

Given Matic’s aforementioned withering form, Kroos’ technical ability with the ball would surely boost Chelsea’s chances of securing a shock top-four finish, although this already seems out of reach with major bookmakers pricing the Blues at a staggering 20/1 to achieve that feat.

If I were Guus Hiddink I would take a chance on Kroos. If the deal does come off then Chelsea will have in my eyes another world beater in their side.

2. Paul Pogba
Another option for Chelsea is none other than Man United reject and Juventus star Paul Pogba. Over the past few seasons Pogba has established himself as a world class player.

His eye for a pass and his knack of scoring incredible goals has really lifted his game and is a pivotal part of the kind of midfield player he is today.

Pogba has become a crucial player for Juve over the past few seasons and it is always a surprise to not see him listed on the match day team sheet.

Pogba would bring not only creativity but drive and tenacity into the Chelsea midfield and his goals that he contributes would certainly help to the cause.

Not many people don’t regard Pogba as a world class player but as well all know, players such as Pogba don’t come cheap, with Juve reportedly asking for around £70 million.

Pogba would be the ideal player to reignite the Chelsea midfield but we will have to see whether Roman would be willing to break the bank and go all out for this truly world class player.

And whether he would be willing to join is another matter – it’s well known that Pogba turned Chelsea down for a similar amount at the start of the season, so it doesn’t look promising.

3. Ruben Loftus-Cheek
This last target is actually not a target, he is someone who is already at the club.

I’m sure all you Chelsea fans know who I’m talking about, Ruben Loftus-Cheek.

Many Chelsea fans find it hard to understand why so many of our youth team prospects never get the chance to play and I am the same. 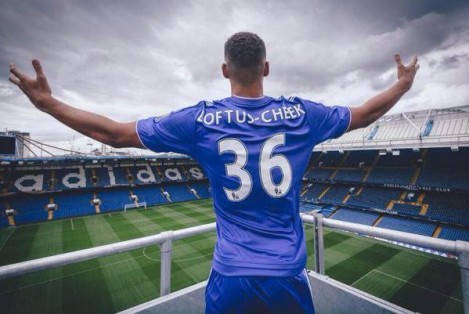 When you see players such as Dele Ali succeeding and making it into the first team at Spurs I always ask myself why Chelsea can’t do the same with their own talent.

RLC has clear potential, it’s there for everyone to see and I personally believe it would be wise of Guus Hiddink to promote a promising youth player rather than simply splashing out upward of £50 million on someone else.

RLC’s ability is unquestionable he scores goals, he makes goals, his drive and power through the midfield quadrant is second to none. RLC has all the ability in the world to become a very good midfield player.

I personally believe we should take a chance on him, the potential is there. I also think it’s fair to say that if Delle Ali can make it at Tottenham, who’s to say RLC can’t make it at Chelsea? We will have to wait and see whether Hiddink is willing to take a chance on a youth prodigy like Loftus-Cheek.

In Summary
All three of the options above are realistic in my eyes.

Chelsea have two options really, break the bank or invest in the youth and give them a chance.

I’m leaning towards giving RLC a chance, the season is a write off anyway.

So what’s the harm in giving him a chance and if it doesn’t work out then we can buy a Pogba or a Kroos in the summer. We will have to wait and see what happens but as I said earlier I know what I’d want to happen.