The very first in our series featuring Official Chelsea Supporters’ Clubs the world over. Here at CFCB we harbour an aim to shine a spotlight on the strength, size and passion of the support for the club as well as the extraordinary lengths that some supporters’ go to in order to watch The Blues.

We hope these features will unite Chelsea fans no matter where in the world they are.

This week we feature Jon Wan, Club President of the Singapore Supporters’ Club:

[icon name=”e-user”]CFCB: When did you begin following Chelsea and walk me through how your love for the club has grown.

[icon name=”e-user”]JW: I have supported Chelsea since 1994, at that time Hoddle was a real cult figure. When he brought Gullit and Hughes in, the style started to change. Furlong and Wise were players I grew up watching. Finishing in the top half of the league, was a luxury then. I have followed the club with dedication ever since.

[icon name=”e-user”]CFCB: Try to give us a sense of how well Chelsea are supported in Singapore as a whole.

[icon name=”e-user”]JW: Chelsea started to become popular more so after Roman took control. He bankrolled super star players in. We had a few good English players, mainly Terry and Super Frank with us and had just qualified for the Champions League. Peter Kenyon stepped in, The Special One followed suit and soon we would win our first league title in 50 years.

In Singapore, the most supported clubs would be United and Liverpool for obvious legacy reasons. However, they’re so popular they have different factions. Arsenal and Chelsea would have the next best local following, and we remain close knit. Chelsea has a strong following, our current official (paid subscription is around 100 members) our Facebook group has around 2,000+ members.

[icon name=”e-user”]JW: In 2006, our founder Mr Allan Chan, who had supported the club since the 1970s decided to start the Official Chelsea Supporters Group (CFCSG). Before that a handful (less than 20) would gather around and watch games together. Since 2007, we have had the Official Affiliation with London and have been ever since. We have achieved Silver, Gold and even Platinum status since our inception.

Mr Allan had captained the club from 2007 till 2010, at that period I had accepted an expatriate job offer and had to leave Singapore. The baton was passed to a Mr Henry Kang who was also one of the pioneers of CFCSG. It was not until my return to Singapore, Allan and Henry spoke to me about leading CFCSG and I accepted this calling in 2013.

Generally, all our committee members are really like a family, helping one another for CFCSG. We are all volunteers. We have been very fortunate to have many experienced people helping and volunteering over the years in social media, graphic design, professional accounting, etc. These factors play a big role when running a non-for-profit organisation.

[icon name=”e-user”]CFCB: How did you start getting Chelsea fans together for games and how has the attendance and fanbase grown?

[icon name=”e-user”]JW: Before social media was active, we had our own website and online forum where we would gather (both now defunct). At one time, we would also call or send each other text messages if we were watching matches together. That was when our core numbers were below 30 members. Now, we solely use Facebook to interact with our members. We pin up live gathering notices so fans are made aware of our match schedules. Friendship develops over time and soon, watching games together is a religion for some of our dedicated fans. We get more fans coming if it is a big game and earlier kick off due to the time difference.

[icon name=”e-user”]CFCB: How many members do you have and are most of them Singaporean or ex-pat English fans?

[icon name=”e-user”]JW: We do not restrict only members to attend our live gatherings although officially we only have 100 CFCSG paid subscribed members. I would say 90% of them are local Singaporeans. the remainder could be expats but not necessarily native English Londoners. We get emails from time to time from global Chelsea fans visiting Singapore to catch a game. Sometimes, we get emails from rival fans whom are playing and just want to watch the game together.

[icon name=”e-user”]CFCB: What are the main objectives of the club?

[icon name=”e-user”]JW: To unite all Chelsea FC supporters in Singapore and around the globe to support our beloved club, Chelsea Football Club!

We also try to help Chelsea fans visit London. We were fortunate to plan this year’s trip against Crystal Palace and to win the league on home soil, what a treat for our few fans there during that period!

[icon name=”e-user”]CFCB: Where do you meet up to watch Chelsea matches and what is the matchday atmosphere like?

I have to be brutally honest, it’s not London but many who have visited us are surprised of all the songs we know and sing before kick-off, “Blue is the Color, Zigga Zagga, Celery” etc. We don’t have large numbers like Indonesia but our cohesion together as a fan club is fantastic. When we won the Champions League in 2012, it was magical. Many fans cried tears of joy.

[icon name=”e-user”]CFCB: With Chelsea winning the Premier League this year, how are you and your club celebrating being Champions?

[icon name=”e-user”]JW: Honestly, we have toyed with many ideas over the years. When we won the European trophies, we wanted to do the bus and all with replica trophies but obtaining a license and permit is not very easy in Singapore, especially for a non-for-profit club.

We usually have a end season barbecue or anniversary party, we will probably plan something a little extravagant for our brethren this year that we have won a domestic double. No fireworks! Just all the fans being together to celebrate this successful season. 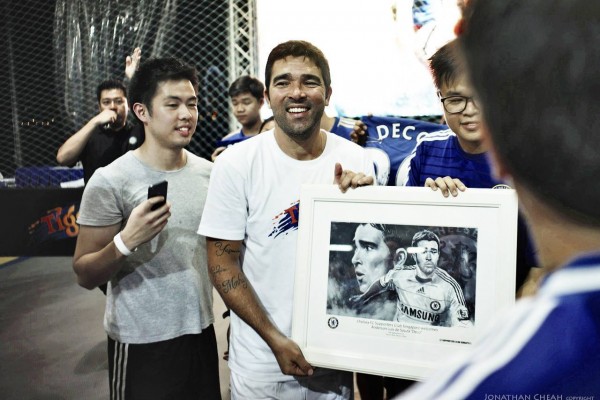 We’d like to extend our thanks to Jon Wan for his superb biography of the Chelsea Singapore Supporters’ Club.

We aim for this to be a regular feature on CFCB so if you and your Official Chelsea Supporters’ Club would like to be featured on CFC Fans, send us an email cfcblogmatt (at) gmail (dot) com.