VIDEO: How Chelsea Will Receive The Premier League Trophy Against Sunderland

Premier League Trophy Presentation
Young Chelsea fan Rachel Key will hand over the Premier League trophy to John Terry this weekend as the celebrations for the club and the fans will begin in earnest.

But before those celebrations get underway, take a minute to learn a bit more about Rachel, her dad Tony and their inspirational story.

Marcel Desailly At The Door
In a nice touch from Barclays, they arranged for club legend Marcel Desailly to surprise Rachel at her front door with the Premier League trophy in his hands. Suffice to say that Rachel was as surprised as anyone would be to have Desailly turn up on the doorstep.

On Sunday as the squad and staff gather on the makeshift stage, you’ll know who the girl handing the trophy over is and why she’s part of the club’s celebrations. 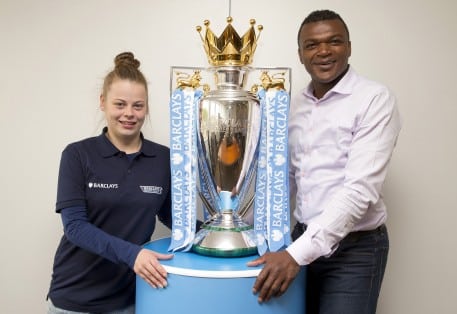