We hope these features will unite Chelsea fans no matter where in the world they are.

This week we feature Yudi Wakiman, CEO of the Malaysia Supporters’ Club:

[icon name=”e-user”]CFCB: When did you begin following Chelsea and walk me through how your love for the club has grown.

[icon name=”e-user”]YW: During my high school years when I was around 17, I would always buy Shoot magazine to read about the Premier League. From there I was looking for a team that suits my soul. Every time Shoot magazine covered Chelsea with photos inside, I would put it up in my room. My room ended up full of Chelsea player posters.

Its very hard to find Shoot in Malaysia nowadays and I miss it a lot. Because of Shoot magazine, I fell in love with Chelsea. It was 1996, Zola’s time. From then on I grew up with a new blood type, ‘blue blood’.

[icon name=”e-user”]CFCB: Try to give us a sense of how well Chelsea are supported in Malaysia as a whole.

[icon name=”e-user”]YW: In Malaysia we have so many Chelsea groups especially on Facebook, some small some very big. They support Chelsea so well, the atmosphere at games is unbelievable and the commitment and organisation to run the groups is fantastic. We collaborate among us, watching Chelsea in different venues and we switch between different venues for big games. We also have recreational activities to grow the relationship and the brotherhood of the group.

[icon name=”e-user”]YW: It began when I set up a Facebook page in 2010 as Malaysian Chelsea FC. Initially, the response to the page was slow in terms of ground participation due to my work schedule being very tight. The page only managed to get 666 ‘Likes’ during its first year.

After that first year, I began to realise we had fans and I couldn’t leave the page empty with no Chelsea news. I started to search for a few admins to help me generate content and make the page look good with fresh content every day.

We moved from one place to another to get as many Chelsea fans to join our club, Soljabiru (Blue Soldiers). Due to the growing size, I set up an administration to help run the club with myself as CEO/Founder, a COO to help with operations, a CFO to manage our finances and a Secretary for our growing administrative work.

We became accredited officially by Chelsea and now have 12 divisions of the club (Kuantan, Putrajaya, KL, Subang Jaya, Sg.Petani, Kangar, Ipoh, Tawau, Senawang, Malacca Town, Kota Bharu and Butterworth) all over Malaysia as well as the Tawau division, our first in Borneo Island. 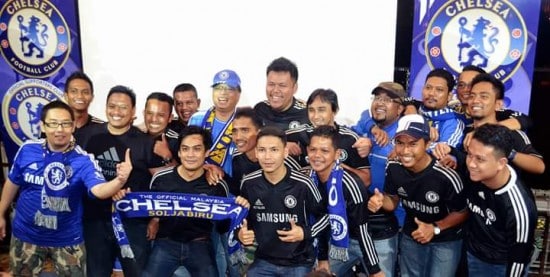 [icon name=”e-user”]CFCB: How did you start getting Chelsea fans together for games and how has the attendance and fanbase grown?

[icon name=”e-user”]YW: We promote it through our social media groups such as our Facebook page, Twitter, Instagram and also through our group divisions. The attendance keeps improving each time there is a game or a meet up. It’s our divisions responsibility to get new members and sign them as ‘Soljabiru members’.

[icon name=”e-user”]CFCB: How many members do you have and are most of them Malaysian or ex-pat English fans?

[icon name=”e-user”]YW: We have total about 205 members signed up for official memberships. Most of them are Malaysian.

[icon name=”e-user”]CFCB: What are the main objectives of the club?

[icon name=”e-user”]YW: Our objective is to gather all Chelsea fans out there to join us and support Chelsea together. We want to build a brotherhood among our members and make sure they don’t feel awkward or lonely supporting the club they love. In the same way our own families would make us feel welcomed.

[icon name=”e-user”]CFCB: Where do you meet up to watch Chelsea matches and what is the matchday atmosphere like?

[icon name=”e-user”]YW: We have our assembly and watch games at Black Pepper Restaurant in Kuala Lumpur.

[icon name=”e-user”]CFCB: With Chelsea winning the Premier League this year, how are you and your club celebrating being Champions?

[icon name=”e-user”]YW: We’re still planning. We are looking forward to gathering all our members and Chelsea fans out there for the final game against Sunderland. We will invite our club Patron, the Government Minister of Agriculture and Industrial Base to attend and watch our very historic moment together. Our patron has supported us a lot, he’s a very dedicated Minister who loves Chelsea. 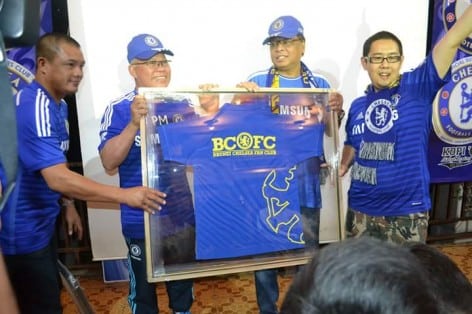 We’d like to extend our thanks to Yudi Wakiman for his fantastic insight into the Chelsea Malaysia Supporters’ Club.

CFC Fans is a regular feature on CFCB so if you and your Official Chelsea Supporters’ Club would like to be featured on CFC Fans, send us an email cfcblogmatt (at) gmail (dot) com.