And that Essien? Well, hanging's too good for him…

Somewhere in London right now, a cabbie is shouting at TalkSport because of the injustice of it all.

“Bloody Chelsea, they’ve done it again, haven’t they? They bought the league with their stolen Russian oil / drug / blood money, ruined English football and buggered up my kids’ Christmas by taking all the stock of that X-Box 360. But they’ve gone too far this time — they’ve only gone and invented the bad tackle haven’t they? That Michael Essien on the German bloke, and he didn’t even get booked for it! Gawd, the Queen Mother’s probably turning in her grave, God rest her…”

Give or take a few expletives, that is roughly what large sections of the media and the football community have sounded like on the subject of “that” tackle since Tuesday night. So, a little perspective on the matter if I may; yes, the tackle was pretty disgraceful and most level-headed Chelsea fans don’t like to see anyone in a blue shirt making such a challenge and believe that Essien should have been sent off. But a good deal of the sanctimonious, holier-than-thou drivel emanating from the media and outraged Liverpool fans (and those who need little excuse to have a pop at Chelsea) is as over-the-top as Essien’s over-the-ball lunge itself. Some of the sanctions put forward (a six month ban was mentioned by one of the thoroughly unbiased ‘pundits’ on Sky Sports News last night; why stop there? Surely a custodial sentence is the only option? Death by lethal injection?) suggest that Essien hadn’t just tackled Hamann but taken a baseball bat to him, beaten him unconscious whilst he was down and followed it up by threatening to go after his family with a chainsaw. So football has a new Public Enemy Number One for the time being; I shudder to think what sort of public outcry will ensue if the Bison does anything more aggressive than tiptoe around the pitch in ballet shoes whilst offering polite handshakes and a doffed cap to the Wigan players at the Bridge this Saturday. 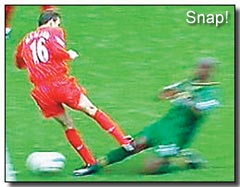 Hamann suffered bad bruising as a result of the tackle but was able to continue playing after treatment and is now suggesting that an apology should be forthcoming from the Ghanaian midfielder. The keener followers of football will note that at the time of writing, Damien Francis is still waiting for a similar expression of regret from the Liverpool player after his truly dreadful two-footed lunge during a game against Norwich last season which fell firmly into the career threatening category; I recall looking at pictures of the incident and wondering why the German international had both of his feet positioned on the then Norwich midfielder’s leg as though it were a skateboard — the only thing missing from the scene was a pair of ridiculously oversized shorts and a Tony Hawk t-shirt on Hamann with some angst-ridden Americans torturing guitars and shouting in the background (I think I may have just shown my age here). Hamann received a yellow card for the challenge, one of eleven that he picked up last season. Two wrongs certainly don’t make a right, but the Liverpool midfielder’s carefully-worded statement suggesting that Essien’s was “the worst tackle I have ever been on the receiving end of” as opposed to “the worst tackle I have ever been involved in” rather proves that selective memory syndrome is the only lasting medical consequence he has suffered as a result of Tuesday’s incident.

To the credit of both sides the Hamann / Essien contretemps, along with a couple of other less brutal but undeniably questionable and equally unpunished challenges (Sissoko on Gudjohnsen in particular) thankfully didn’t drag the game down to the level of a bad-tempered brawl; the players retained their discipline and despite a few verbal exchanges between the benches the officials had very little to report to their UEFA masters. Had it been an Arsenal v. Manchester United fixture, one can only imagine how much handbag-fuelled hysteria and food-lobbing would have ensued and filled the media in the aftermath.

The game itself was about as predictable as a football match can be; Liverpool didn’t need a win and packed themselves behind the ball, occasionally pinging a speculative long pass towards the now-prolific Peter Crouch just to let him know that there was a game going on somewhere behind him. The Scouse masses in the Shed rambled on and on about our lack of history (it’s only our centenary year, after all) and how many trophies they’d won in a “My Dad’s bigger than your Dad” playground banter sort of way, we occasionally responded with the usual stuff about stereos, giros and thieving; nil points for originality on both counts I’m afraid. It is said that familiarity breeds contempt, but neither side could muster that much feeling about the eighth (yes, eighth) game between them since Jose and Rafa abandoned the Iberian peninsula for life in England; both managers had studiously played down the significance of the who-tops-the-group game during the build-up stating that qualification by any means was their only aim. The rather tired looking Lampard had what is best described as a stinker whilst Drogba toiled alone up front with little by way of support, a resurgent but not yet fully fit Robben narrowly missed our best chance and the generous odds of 11-2 being offered before kick-off on a 0-0 scoreline at full time sounded more and more like the bet of the season as the game dragged on.

From a personal point of view I’d donate limbs, teeth and many of my worldly goods not to have to sit through another Chelsea v. Liverpool European game again and I suspect much of the rest of the country would do the same; Liverpool’s abject refusal to play football against us when the avoidance of defeat is the only requirement (another good defensive performance on their part, it has to be said) has proved a very effective game plan but it is hardly the greatest advert for the game. Benitez is an astute manager and knows all too well what could happen if he tried to play an open game against Chelsea; this season’s league fixture in October still presumably fresh in his mind.

Now that the dust has settled and last night’s games have given us the final line-up for the last sixteen of this year’s Champions League, most of the usual suspects are present (although the list doesn’t include Manchester United as far as I can see — surely a misprint?). Jose’s insistence that first or second place in the group stage would make little difference is fairly classic Mourinho bravado; most of the second placed teams would undoubtedly provide less of a test than the sides that we are likely to face. His admission that he wanted to avoid the Italian teams at the same stage last season will be firmly in the minds of Juventus and both Milan sides, any of whom we could play when the competition resumes in the New Year. The prospect of a rematch against Barcelona will have the press drooling at the possibility of old wounds being reopened and a hatful of quotable material from the Special One; Lyon (their unfeasibly mad-as-a-badger-on-toast president Jean-Michel Aulas is probably still sticking pins in a voodoo doll of Peter Kenyon as I type) and Villareal are our other possible opponents.

Our form in the group stages this year has been nowhere near as fluent and convincing as last season’s performances with only the game against Betis at home really standing out, but there is plenty of time for us to remedy that before next February. The draw takes place on Friday 16th December at UEFA’s headquarters in Nyon, in between games against Wigan at home this weekend and our last ever league visit to Highbury a week before the nation stuffs its collective turkey.