Into the Lion's Den 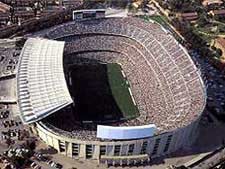 As a prelude I thought I’d write a few lines before the big match tonight. First, have a look at an image of the Camp Nou (when did it change from the Nou Camp?). Do you notice the striking similarity to The Coliseum in Rome? In fact all sports stadia are pretty much based on the architectural principles of The Coliseum. And no doubt there is a similarity in its purpose, although hopefully there will be no real outcome of death, just its sporting equivalent of unceremonious ejection from arguably Europe’s premier competition. Chelsea, the gladiators, are undoubtedly entering the lion’s den. We are the expected losers waiting to be sacrificed in front of 100,000 abusive, screaming and fiercely partisan Catalans. Juan Laporta, the flamboyant President of Barcelona and the man behind their revival after many years of suffering at the hands of hated rivals Real Madrid, will take his throne in front of his adoring masses with his thumb firmly poised in the downward pointing position.

No doubt we’ll be reduced to 10 players at some point and no doubt we’ll play heroically. There seems no doubt that 90% of the UK and European, perhaps even global football following population will be draped in Barcelona colours and praying to the Gods of Football to side with Barca and give us upstarts a damn good thrashing. Rugby and cricket fans, as well as fans of other sports will adopt Spanish accents, drink San Miguel in Tapas bars the length and breadth of the country, to pontificate on a sport they know sod all about and to declare their allegiance to the team from Catalonia.

It’s time for the Chavs from South West London to be returned to their humble 4×4 tugged mobile home existence. Once again the Lords of the FA, UEFA and FIFA, and Gooner supporting, ex-footballer, part-time journo knobbers like Liam “Barcelona’s win was a victory for football over money and organisationï¿½? Brady can rejoice in the streets that justice has rightfully been done. I can hear the press and broadcast media sharpening their knives now. If we win, the story will be about how we cheated in some way or another, or how we ruined the game by playing a defensive, dull and pragmatic game, and consequently how our style and lack of it is bringing the beautiful game into disrepute. Lose, and it’ll be the end for Jose Mourinho, how Roman is preparing to desert us, how the team will be broken up, how Super Frank will sign for Barca in the next two days because his wife’s Catalonian. Damned if we do, damned if we don’t.

Our benevolent paternal figurehead will applaud his brave warriors, and Dr Evil look-alike Peter Kenyon will place his little finger to the corner of his mouth in defiant laughter as he cooks up the next evil plan for world domination. It appears that the current vogue for anti-Chelsea bile in the press and broadcast media is the price that success brings and only some form of tragic event can convert the world’s spiteful and unjust view of us. So be it, I’ll take the hated view anytime in front of being loved. Better to be successful and hated, than failures and loved. Remember how liked we were under Clownio? How respected he was? How many trophies did he win? Yep, the last bit stings doesn’t it?

Anyway as I prepare my critique for the post-game article my thoughts are pretty much focussed on nothing else. I believe we have the equivalent of a mountain to climb, in a blizzard, whilst wearing a t-shirt, mini-skirt, thong and six-inch platform patent leather boots whilst blindfolded. My heart says we can do it, but my head says Barcelona will be just a little too good for us in light of their first leg lead, their thirst for revenge, our inability to defend like we did last season and keep a clean sheet, referees making poor decisions and lastly, the biggest enemy of all… fate. The Man from Fate… he say no!

Of course this view horrifies some of my fellow Chelsea-loving acquaintances, and no doubt readers of this blog who firmly believe that we will win by 2 or 3 clear goals. I admire their optimism but after 35 years my sense of pessimism over every game, no matter who the opposition, is still deeply ingrained within my heart and soul. I believe the game will contain an element of controversy and the only thing that will cause Barcelona to come unstuck is if they adopt a “devil-may-care” attitude that they have already won the tie. Then, just then we might see a Chelsea side determined to do something for a much loved and missed son, Peter Osgood (see posts passim) and produce a truly huge upset. One that perhaps even matches Liverpool’s comeback against AC Milan in the final of the same competition last year.

I’m sure Nick will post before the game with who’s likely to be in or out and make his customary prediction. My view, as unpopular as it might be, and one which will no doubt lead to accusations of not being a real fan and how I must be positive because that will channel to the team some 750 miles away, is that this is the equivalent of us beating Manure 2-1 at Old Trafford and them coming to the Bridge and winning 2-0 to win the tie. My heart pumps faster as each minute passes, inside praying and singing for the gladiators to slay the lion, but my head says, with Spock like logic, that it’s just a bit too much. Scoreline? Barcelona 1 Chelsea 0.