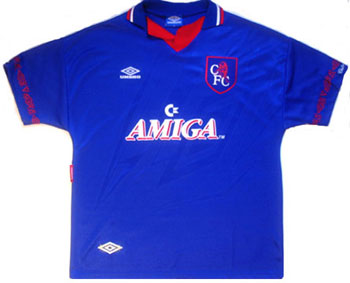 Thanks to our friends at Classic Football Shirts we have this vintage 1993-94 season home shirt to give away.

Made by Umbro, it bears computer company Commodore’s Amiga logo which featured on the club’s shirts from 1993 until 1995.

To be in with a chance of winning this shirt, just answer this simple question:

Which former England manager managed Chelsea from June 1993 until May 1996?

Answers via the email client by 9am GMT next Friday, 17th November. Winner selected at random after this date.