The summer will no doubt provide us with wild speculation as the Blues are linked with all and sundry from every corner of the planet. Rare is the occasion these days at the Bridge that a former Tranmere Rovers full-back is rumoured to be replacing an outgoing Brazil international. However the Aaron Cresswell to Chelsea rumour just won’t go away with now probably two weeks’ worth of speculation slowly gathering pace to what is now being reported as a £20 million transfer.

Granted, Filipe Luis hasn’t quite had his chance at Chelsea and that is largely down to the in-form and in-favour Cesar Azpilicueta. However, without really getting his chance to shine it does seem that he’s on his way back Atletico Madrid. A player that wants to play football I have absolutely no problem with.

The official coming out of West Ham (and from the player himself) suggest that he’s happy and wants to continue his learning with the Hammers. However reports on 28th April link West Ham with a replacement left back should Aaron Cresswell make the move which does fans the flames, something which the press (and player agents) generally tend to take great pleasure in. Said reports do indicate that the chain of transfers would only begin should West Ham be offered a price that they couldn’t turn down (which most definitely isn’t unheard of in this business).

Cresswell is a peculiar choice and on the face of it £20 million seems incredibly steep. West Ham paid £2 million for him 12 months ago. Paying over the odds for an Englishman with one good Premier League season under his belt? I’ve heard this one before. The figure is probably bloated due to him signing a five year contract with West Ham only last year when he joined the club. I would guess his solid performances for Sam Allardyce (a manager known for playing players that stick to their tasks with discipline) this season have flagged to the people that matter at Chelsea that he could do a similar job for Jose when called upon. A backup full back for £20 million, it still doesn’t sit quite right with me. Is this really the state of the transfer market?

Update 23rd April – Man City Rumoured To Be Interested
The Manchester Evening News suggests that Man City want to jump on the Cresswell bandwagon which will no doubt inflate his price further.

Update 24th April – Cresswell To Stay With West Ham?
The Aaron Cresswell to Chelsea rumour seems to be quietening down. After a couple of weeks worth of speculation around a move to Chelsea, Man City’s recent interest seems to have forced the hand of Sam Allardyce and Cresswell to come out and play down the rumour.

Obviously it’s nice to see things like that [being linked with City and Chelsea], but I have four years left on my West Ham contract and I’m very happy down here.

As quoted in The Metro on 23rd April.

Update 28th April – West Ham Target Replacement Left-Back
Hull City’s Andrew Robertson is reportedly an option to replace Aaron Cresswell should he make a move away from West Ham this summer. The report does state that Cresswell doesn’t seem to be seeking a move away from the club however a big enough offer I’m sure would turn any club’s head. Every player has his price.

Any reported move for Robertson would be all the more tempting for West Ham should Hull be relegated from the Premier League with a difficult run in and not long to save themselves.

Update 7th May – Aaron Cresswell Cleans Up At West Ham End of Season Awards
After an impressive season and not missing a minute of Premier League football in his first full season at the top level, it looks as though West Ham’s valuation of Cresswell could be inflated even further after he scooped up three different player awards at the club.

On the night, Cresswell took home ‘Hammer of the Year’, Players Player of the Year and Signing of the Season at the West Ham Player Awards night. It also justifies Chelsea’s interest and gives some insight into why the club’s scouts have been to take a look at him. 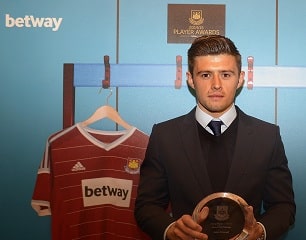 Update 22nd May – Cresswell Can Hit a Volley
With left backs being required to get forward more so than ever in modern day football it’s more of a requirement that they can finish too. Well Cresswell showed recently in training that he’s more than capable. The below video was just released on West Ham’s YouTube channel. What a hit.

Update 25th May – Cresswell Tweets His Disappointment at Allardyce Leaving West Ham
Maybe a turning point for young Cresswell, he knows how much faith Sam Allardyce put in him as a player and there are no guarantees that the next manager of the Hammers will think the same. Indeed, a big name foreign signing a left back and Cresswell could quickly find himself down the pecking order. It will be interesting to watch how his future develops as West Ham search for and appoint a new manager.

Been a disappointing end to the season but just want to thank everyone for your support all year round, week in week out @whufc_official ??

Also to the gaffer who give me the opportunity to play for the club.. And has been brilliant with me..

Update 30th June – Cresswell Signs a new 5-year contract with West Ham
Aaron Cresswell looks to have ended this summer’s speculation by signing a new long term deal with his current club which is now due to expire at the end of the 2019/20 season.

If anything, this smells more of the Hammers future-proofing their investment. Given that the likes of Chelsea have been sniffing around this summer plus the chance that he will have another stellar season in the Premier League (which would also likely lead to an England cap), a long term deal ensures that West Ham will receive a sizeable fee should he be the subject of a serious approach.

Summary
So it all seems to have come to an anti-climatic conclusion with Cresswell signing his new deal. For this summer at least. Whether Chelsea are back in for Cresswell next year remains anyone’s guess but with Filipe Luis still expected to move on, there will be a spot still to fill at left back as cover for Azpilicueta.

We’ll update this post as and when any news breaks.