This is one that shouldn’t slip under the radar.

Chelsea today submitted a planning application for a new stadium at Stamford Bridge with seating for up to 60,000 supporters.

The official release on the Chelsea website provides more detail:

The club goes on to state “the planning process will last beyond the end of the season; if the application is granted planning permission there will still be a lot of work to do before redevelopment can start, including obtaining various other consents. We will inform you of progress through this process.”

London Borough of Hammersmith and Fulham Press Release
On the council’s website, they provide further details and further images of the submitted proposal (interestingly not supplied in the CFC press release).

Here’s the summary of the application as the Borough see it:

“The council has received a full planning application to build a new football stadium within Stamford Bridge Grounds. The application comprises the demolition of the existing football stadium which has a capacity of 41,600 seats and other buildings within the ground, and the construction of a new larger football stadium with a 60,000 seat capacity. Other features include ancillary stadium-related uses including a club shop and museum, plus a separate restaurant/cafe use.

The new stadium involves both excavation works and the construction of new external concourse areas.

Along with the images supplied: 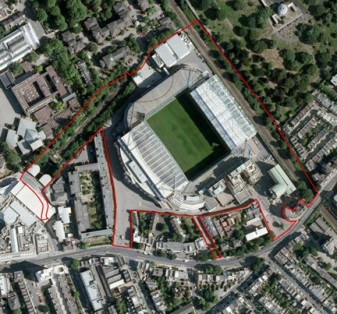 Comments on the application are open to be received until Friday 8th January 2016.

Let us know your thoughts on the new stadium plans.