England gets behind Barcelona

From Toxteth to Tottenham. From Mile End to Moss Side. England will be united on Wednesday evening. Sharing the same dream. Feeling the same hope. Willing the same outcome. Not since 1966 has the nation lined up so passionately behind a football team.

Except for a small, Blue corner of West London. Where, according to popular myth, a rag tag collection of aging hooligans, Russian gangsters, bored rugby fans, glory hunters called Crispin and Japanese tourists will be making a futile last stand for the Antichrist.

Journalists have been falling over themselves to declare their allegiance. Liverpool goalkeepers, Arsenal midfielders (you bitch!), Spanish managers, UEFA officials, Brazil (the nation, not the fat Scot on TalkDrivel but probably him as well), Permed Swedish Referees for Gay Whales, everyone who is anyone in the wide, wide world of football is rubbing their hands in anticipation.

It’s rumoured that James Lawton has hired a hooker, as he expects to get an erection for the first time since the late Seventies. It just feels so right. Those lovely Boys from Barca. They play such joyous football. They will put the Evil Empire back on its arse. Tony has already spoken to Gordon about making Thursday ‘Thank God for Catalonia Day’. Gorgeous.

If I’m honest I love it. Love it to pieces. Do it over the kitchen table love it. I would hate it, loathe it, despise it, agonise over it, if any of those little knob jockeys in the press claimed they wanted a Chelsea victory. I would be ashamed if fans of Tottenham or Liverpool, or anyone similarly afflicted, were not fervently praying for a Barcelona victory.

The omens are good. Chelsea are not the same team as last year. Our defence is leaky. Understatement. I think the only team who haven’t scored against us this year are shot shy Liverpool. Everyone else, including Colchester United, has managed at least one goal. Middlesbrough got three in one game. In one game! Last season we didn’t let in three in three months. Jesus. We’ve had it.

Gallas, who many (correctly in my opinion) say is our best defender, will not play. Terry is carrying an injury, Lampard is exhausted, Duff anonymous, Robben too busy falling over, Drogba has no control, Crespo is dreaming of Milan, SWP is dreaming of Eastlands (poor kid), Essien is suspended, Bridge is at Fulham. 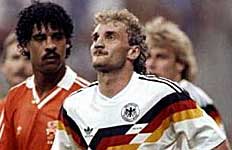 Our only hope may be to get Rudi Voeller to come and join Mourinho on the bench. But perhaps not within spitting distance of the Barcelona manager. I wonder if Jose has considered offering his mate Frank Rijkaard a bye into the next round? Perhaps Bruce Buck should call UEFA HQ and offer to concede the tie right now, in the interests of football. In the interests of decency. In the interests of the Rogan Taylor Fund for Siberian Oil Orphans.

To make things worse I watched this video of Ronaldinho, in training. He was chipping a ball against the cross bar, and getting it to bounce straight back to his feet. Every time. He didn’t miss once. Not the goal you understand. Just the crossbar. He was outside the penalty area. That’s impossible. But he did it. Who have we got marking him? Spiderman?

Plus, to make things even bleaker, we have to play the second leg in Barcelona. Your mission Jose, should you decide to accept it. Can’t be done can it. If it wasn’t Mission Impossible already that certainly clinches the deal. Barcelona will know exactly what they have to do. On their own ground. In front of 90,000 fans. And a Scandinavian referee who was an altar boy with Anders Frisk. Oh dear.

The last time I remember a game anything vaguely like this, where a team of the shining light was lined up against the forces of darkness, was in the 1974 World Cup Final. All out attack merchants, talented wonder boys and general lovable, good guys Holland (including honorary Catalan Mr Johan Cruff) were lined up against a team of well organised, despicable storm troopers. Someone remind me who won that game?

So come on Barcelona. England Expects.